A few weeks ago, I celebrated my 25th birthday, and a few weeks before that, my sixth wedding anniversary. You’d think that at some point, I’d start feeling kind of like an adult or something, right?

After all, I’ve marked off almost the entire imaginary checklist that’s supposed to make you a grown-up:

The thing about all of the above, though? It makes me realize just how much of it is up to chance. I had the opportunity for all of the above thanks to a convenient alignment of circumstances. Yes, I helped stack the odds in my favor, but a lot of it comes down to having the right opportunities and the ability to pursue them when they arrive, and not everyone has that.

More importantly, it made me particularly aware that having a house doesn’t magically make you more grown-up than someone who lives in an apartment or is staying with friends and family while the economy tanks; being married isn’t somehow superior to being happily single; dependence on a car is really not what it’s cut out to be, and many people are better off walking, biking, and taking public transit.

So what makes a grown-up?

The thing that finally made me feel like an adult: coming home with a grocery bag containing four comic-books, a Captain America t-shirt, and a growler of honey mead, knowing I was coming home to edit a novel. 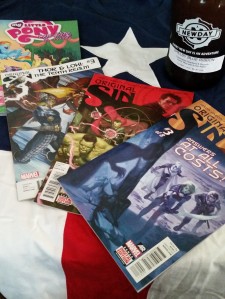 And it made me feel grown-up because there was no shame involved. I don’t subdue my nerdiness around strangers; I don’t shy away from the fact that I’m a writer, or that not all my stories are PG; I don’t sneak around, thinking I’ll get caught red-handed if somebody sees me with an alcoholic beverage. I’m comfortable with who I am and how I’ve chosen to live my life, and that’s a huge deal.

I think being a kid/teenager/adolescent/whatever you wanna call us, is all about reaching that equilibrium.

You try every possible combination until you find something that feels right. Every new set of interests, every possible career path, every sexuality that seems like it might be right, and so on, and so forth. And yes, you’re going to go to some kind of weird extremes that will make you look back on your younger self and shake your head. You’re going to do stupid things. You’re going to make mistakes. That’s the point– you have to make those mistakes in order to learn from them.

But eventually you’re going to hit that sweet spot where you’re actually pretty cool with who you are, and you stop focusing inward and turn your focus outward.

The thing is, you’re not stuck as who you are the minute you make that choice. Eventually you’re going to learn something new that makes you want to take things in a different direction, but that’s okay. It’s an adjustment– after all, every system needs periodic updates, and even the most perfect machines need a few tweaks to run perfectly.

But that’s just me. What do you think makes you an official adult?