Even when you’re writing fiction, there’s a whole lot of research involved, and a simple question can send you down into some really weird places.

I’m sure that sometimes it can seem like I’ve given up on writing entirely, but I promise, I’m still working hard at it. It takes a long time to put a book together, and putting words on page are only a fraction of the work that goes into it. Even when you’re writing fiction, there’s a whole lot of research involved, and a simple question can send you down into some really weird places.

I need to know how long it would take to properly clean and disassemble a gun, so I know how long the other character in the scene has to perform an action.

Turns out that time depends entirely on the kind of gun we’re talking about. It’s a trope at this point that a modern handgun can be disassembled and reassembled in a matter of seconds, typically while the petulant protagonist keeps eye contact with whoever just challenged them. But I’m not looking at a modern handgun, I’m looking at something significantly lower-tech than that.

Turns out that’s actually a turning point between flint-lock and modern weapons. And since our gun-wielding protagonist is lower-class, she’d probably be using an old gun rather than a shiny new one. So let’s look through the same database but back up a few decades, and search for guns in the first quarter of the 19th century.

I throw out the pistols and revolvers– I wanted this to be a rifle. Reading several paragraphs into the description of the first, I toss that one out as well: it’s a smooth-bore gun, meaning it’s about as accurate drunk as it is sober. I said this character is a pretty good shot, so that won’t do.
Which leads me to this one:

A rifled barrel, a little more than twenty years old at the time, but one of the first models to use interchangeable parts (and therefore relatively inexpensive and fairly easy to disassemble and reassemble for cleaning). And then I can start the process of watching Youtube videos of gun collectors talking about their favorite antiques.

That’s where I find out that in a pinch, the rifle can be converted into a smaller (and less accurate) handgun, and that it had an adjustable trigger to make it a good gun for sharpshooters (relevant to another character).
I also learned that the assembly of this gun requires a screwdriver, which would make it take significantly longer to assemble and disassemble than modern handguns. Plenty of time for the other character in the scene to get pretty far along his task.

And sure, I probably could have saved myself an hour or so of research by just making up a number and handwaving it as “it’s a fantasy story, don’t worry about it”, but from that I got a whole lot of detail that I never would have gotten otherwise.

It’s one of the things I really love about this job. 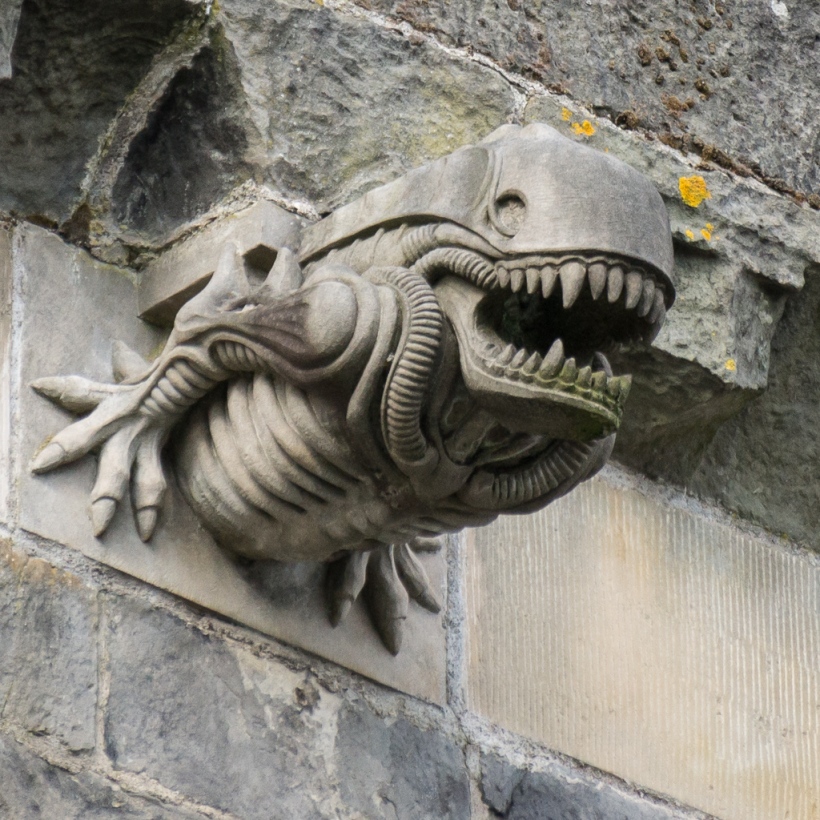 We’ve been seeing a lot of gargoyles recently, haven’t we?

The beasts in I, Frankenstein, the heroes (mostly) in the 90s animated series, the living stone Constable Downspout from Terry Pratchett’s Discworld series. But this is actually a relatively new monster: an often-winged demonic-looking creature that is strongly associated  with rock and tends to perch high on rooftops like a sedimentary Batman.

I think it’s especially noteworthy that all three of these works take place in city centers, and if they’re not outright urban fantasy, they’re close enough to it to wave hello.

That might be part of the reason behind the rise of gargoyles-as-monsters in the modern day– for the first time in history, we have a whole lot of buildings very close to one another that are extremely tall, (thanks to the invention of the modern elevator that made taller buildings practical).

The modern take on monstrous gargoyles dates back to the 1930s, with movies like Maker of Gargoyles and The Horn of Vapula (both from 1932).

Before then, European gargoyles were architectural details, meant to act as decorative rain spouts to keep water from damaging the mortar and masonry of the building (statues that weren’t water spouts were known as grotesques). They were often a chance for stonemasons to get creative, and so they’d often look like animals, people (often ridiculously exaggerated to make fun of them) or inside jokes.

One story about the “origin” of gargoyles is of the dragon La Gargouille that attacked the town of Rouen in 600 AD. It was defeated by a travelling priest, but when the creature’s head and neck didn’t burn to ash with the rest of the body, the locals nailed it to the church as a warning to other evil creatures. Other origin stories speak of Celts who harnessed the powers of animals they had hunted by hanging them on the outer walls of their towns to “attract luck and repel evil”.

So what about writing gargoyles as monsters? Really, that’s up to you. You can draw from the stories that have been written in the last ninety years, or you can give your own spin on our old architectural guardians. But as you write, here’s some ideas to play with:

There’s a lot to think about, and a lot of room to play. So have at it, and have fun!