The weirdest thing happened this week. I was reading a blog post, when this person named SugarOpal invited me to give the subject of the post a shot.

An older– now mostly defunct– therapy technique involved showing the subject a series of images, and having the patient tell a story based on the images. In the words of Rhiann Wynn-Nolet: “The pictures are often morally ambiguous and some suggest strong emotional content. The client is shown an image and narrates a story to go with it. In theory, the client’s narrative will reveal unresolved issues, fears, pathology, etc.”

Ms. Wynn-Nolet had her MC describe the pictures; now I’m going to have my MC do the same– and I invite you to do the same with your characters and post a link. Let’s see if we can’t make this a meme!

I’m using the pictures she posted on her blog, which are as follows: 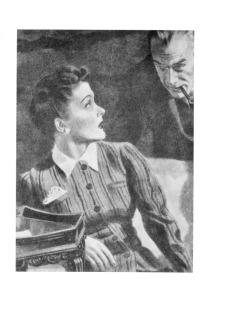 For my foray into psychology, I’m using Aren Dreamkeeper, the protagonist of my current fantasy WIP.

Aren: It’s clear what’s going on in the first picture. Connect it to the other two, doctor? I suppose I can do that.

Names first. The man’s name is Douglas. The woman, Myrta. That’s the name that goes with her face, at least. No, they aren’t married (while we’re on the subject of unresolved issues, doctor, shall we discuss your fixation on sexuality? No? Then kindly shut your mouth and let me finish). Myrta is– was– the family housekeeper. Douglas does have a wife, if you must know. Her name is Helen.

Douglas is a decent man. Fair, and kind enough. He’s noticed a decline in the quality of Helen’s work of late, so he pulls her aside in private. He wants to know what’s going on– is she ill? Is something bothering her? As I said, he’s a decent man.

Myrta chews her lip, wrings her hands– which strikes him as odd, because she’s always berated the cook’s girl for that. Called it a simpering habit, unfit for the household. Myrta confesses that something is the matter, but she daren’t say it out loud. She begs him to come closer, to whisper it in his ear. Not exactly proper, but curiosity usually wins out over propriety, and so Douglas leans in.

It’s all the invitation Myrta needs. She claps one hand over his mouth and nose and wraps the other around the back of his head. One good twist, a sound like a cracked knuckle, and he’s limp in her arms. She picks him up like he’s a bundle of rags and stuffs him into the closet. That’s what cinches it, you see. No matter how lousy an employer he might have been, no maid worth her apron would toss her rubbish into the closet like that. It goes against professional pride, you see. But this isn’t Myrta. Not the real one, at least. The body on the floor isn’t even cold before she’s pulled another of his suits from the closet (yes, doctor, it’s his closet. Do you have any other questions or may I continue?) and put them on. (No, she takes off her own clothes first, and then puts them on. Doctor, I don’t care if there are bars between us. If you interrupt me one more time I am going to tie you up and gag you with a sock.)

(Are you quite finished? Are you sure? Thank you.)

When Myrta leaves the room, she’s a perfect replica of Douglas. His looks, his clothes, the way he walks– his own mother wouldn’t doubt him.

I’m sure my ability to design an entire house isn’t what’s being tested here, so I won’t bother with those details. Suffice to say there’s a drawing room, not-Douglas makes his way there, and Helen (that’s his wife, if you recall) is already nestled in the love seat, reading a book.

Not-Douglas leans down to kiss her, but it feels wrong. The taste, the movement, the amount of pressure– it’s all wrong. Helen pulls back with a look of shock– that one, as a matter of fact– and he just smiles. The impostor didn’t intend to maintain the charade much longer, anyway. He steps closer, his hands turning into claws– (Are you all right, doctor? You look pale. Here, let me take out the sock. I’m very sorry about that. It can’t be very appetizing.)

Barring the details, the house is empty. Not-Douglas pulls his jacket tighter around himself and stepps outside. The other servants wish him a pleasant walk, inquire if he’ll need anything while he’s out. A picnic lunch, perhaps?

By the time he turns the corner, he’s wearing the face of a wisened old veteran. He changes bit by bit, just out of sight and completely unnoticed. By the time he perches in the doorway of an unkempt old jailhouse, he’s a child. Douglas’ fancy clothes are unrecognizable,  all baggy and rumpled around his tiny frame. He’s just another beggar boy, watching the to-do as the police carriages come tearing down the street, their sirens screaming homicide.