If you’re not familiar, popular author and awesome blogger Chuck Wendig does a little ditty known as Search Term Bingo. The deal is thus:

WordPress includes a feature where it tells us what search terms led people to our site. Some of them make perfect sense. Others, however, can get downright silly. So what Chuck does (and what I’ll be doing today) is post the latest search terms and add commentary. Some of these are variations on the same theme, so I’ll be combining them.

So without further ado, here we go:

Seriously, this is the single most searched-for thing that gets people here, in one way or another. Personally, I’m curious how many of you lovely readers are video game fans, and if you’d like more stuff in that particular direction. I’m also quite pleased with how good the writing has gotten in video games in recent years.

WHOSE LINE IS YOURE A WIZARD HARRY

That would be Rubeus Hagrid: a half-giant and animal lover from J.K. Rowling’s Harry Potter novels, who once delivered a baby on a motorcycle. True story, yo.

On that subject, someone asked for a TIELINE OF HARRY POTTER BOOKS

I don’t have a tieline, but here’s a picture of my husband’s tie-hangar. Three guesses who gave him the fish tie~

I happen to use Scrivener a lot– it’s probably tied with Microsoft Word for my favorite word processing program. However, if you’re thinking about getting it, I recommend going for NaNoWriMo first: one of the prizes for winning is a heavy discount for the software.

I did write a post on warding off the return of depression, though this isn’t usually the stuff that works when you’re in the depths of it. At a time like that, sometimes you just need to find your corn.

Dammit, how’s you figure out I live in Indiana? Now I’ll never be able to warsh my car in peace!

HAMLET “SEEMS? I KNOW NOT SEEMS” WHAT ACT AND SCENE IS THIS FROM

Act 1, Scene 2. Now let me point you to my dear friend No Fear Shakespeare, who got me through entirely too much of my high school career.

STANDING ST FORK ON THE ROAD

Here you go. This is St. Fork, the made-up patron saint of tableware. He is standing on the road. 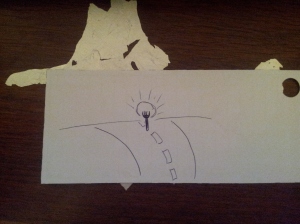 That’s usually a Mother archetype, also frequently associated with the moon and water, thanks to the monthly nature of moon phases, tides, and menstruation.